The Dangers of Obesity (Frankie's story)

Even as a child, the dangers of obesity loomed threateningly over Frankie. Always a big eater, he graduated two solid foods long before Reaching his first birthday, and I do mean solid, hot dogs and beans solid.

Food was often used as a treat, more of a reward for being a "good little boy".

Because of this, every little bite became something so much more than just fuel for Frankie's body.

What are some of the obesity dangers?

In fact, his views on food grew into even more unhealthy eating habits. By the time he reached the age of 10, he weighed well over 150 pounds! More than twice the size of his peers

Frankie's parents were so proud of their "big boy" and simply ignored the possible dangers of childhood obesity. Instead of encouraging a healthy eating program, his dad boasted to anyone who would listen, how his son would "be a great defensive lineman one day".

" All Beef Frankie ," that's what the other kids called him in school. " Even his fingers look like little wieners ," they'd say. " Careful, All Beef Frankie, don't eat your fingers "

To save himself, Frankie became the class clown, poking fun at his own expense before the other kids even got the chance. He would roar with laughter when telling the story about the time he broke the chair on the field trip to the planetarium. " Those planet heads spend all day staring into space and can't even build a strong enough chair! " He quipped.

Inside though, little Frankie was mortified and embarrassed. He never told anyone just how difficult it had become for him to move around, how uncomfortable he felt just sitting in the classroom, in chairs built for kids half his size.

Instead, he got comfort from food, and tried to make his parents proud.

In his teen years Frank joined the football team, finally finding a place where his morbid obesity could actually pay off. On the field, his 250 plus pound frame, routinely punished opposing players.

Coaches, teammates and fans all encouraged his large bulk because of what he could do to the other team. They either didn't think about it or they just didn't realize the real dangers of obesity for Frank.

-Reality had other ideas though, and they came to light during a game when Frank had to be carried off the field. 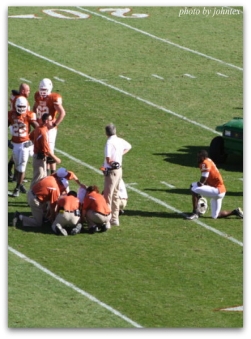 " I'm way too young to have a heart attack, " Frank had convinced himself when the first twinges were felt earlier in the day . He continued his practice though, and proceeded into the game.

He felt better once the game started and progressed, until sometime after the second quarter. -All of a sudden, the football field started two blur before Frank's eyes.

Finally ... Frank collapsed into a lump, onto the field.

Fortunately for Frank, his school was one of the first to use portable defibrillators, and it saved his life.

It took four coaches to lift Frank onto a stretcher and get him off the field. Frank didn't know. He was unconscious. His abused body had finally decided that enough was enough and shut down.

The doctor said Frank had a "cardiac arrest due to abnormal arrhythmia," was "showing early signs of cardiovascular disease" and pending test results, was also Pre-diabetic.

The cause was clear: childhood obesity. Frank's weight had put so much stress and strain on his body that serious illness settled in easily.

Uncovering the Dangers of Obesity

Studies have shown obesity in teens continues to grow. It also shows that 6 out of every 10 Americans are overweight, and like Frank, nearly 30% of all Americans are obese.

It all starts with the lack of a healthy eating program and daily exercise.

The importance of physical fitness should be introduced at a young age, along with the need for healthy eating plans.

-Some very serious disorders and diseases are directly attributable to the dangers of obesity:

And that doesn't even touch the psychological effects of obesity. Kids who suffer from childhood obesity, and obese adults as well, often have serious emotional problems.

Anxiety, depression and low self-esteem, all can lead to unsafe behaviors like alcohol and drug abuse, risky sexual conduct, and even suicide.

Causes and Effects of Childhood Obesity

Frankie's case may sound extreme, but it's a lot more common than you might think. The number one cause of childhood obesity, begins with unhealthy eating habits and a lack of early childhood nutrition.

Exogenous obesity, better known to you and I as plain old overeating.

Fast food and childhood obesity, all too common these days. We all eat it more than we should, kids do even more if we let them. Overeating is bad enough, overeating fast food is even worse because of the higher calories and fat content.

Combine that with a lack of exercise , and even though Frank was active on the football field, he ate a lot more calories than he burned off.

The cause of childhood obesity, and overeating in general, can often be traced back to the home environment .

Both mental and emotional issues can also factor into the causes.

In fact, the psychological effects of obesity may be the hardest of all the dangers of obesity to overcome. Unhealthy eating habits are often deeply ingrained into a person's psyche, just as they were with Frank.


The Simple Cure for Childhood Obesity

Not surprisingly, you can cure overeating and thereby avoid the dangers of obesity that go along with it: take off some of the weight so the body can heal itself by adopting some good eating habits.

-Of course, it's much easier said than done, and not quite that simple.

Just look at the fixed amount of weight loss aids advertised all around us. Clearly the problem of weight gain, childhood obesity and the dangers of obesity are big issues in America today.

The cure for obesity is really quite basic, if somewhat difficult to achieve: burn more calories than you take in, and ... you will lose weight .

-To cure overeating requires commitment and hard work, but a healthy eating program and regular exercise will take the weight off every time!

From Dangers of Obesity to Obese Bmi Chart

"Obesity is a mental state, a disease brought on by boredom and disappointment." ~Cyril Connolly, The Unquiet Grave

From Dangers of Obesity back to Home Page

The Real Dangers of Obesity

-Share an inspirational health story of your own or read some of the health stories left by other visitors to this site.

-Have you ever completed the Cooper Test Run? Let us know your results, or see how far others have run it, in their Cooper test, you just might be in for a surprise.

-By subscribing to our blog
(don't worry no email needed)