I can still remember those 3 words echoing over and over in my head breast cancer tumor   ... as if it were just yesterday.

-We'd just gotten back from our annual summer reunion at the beach. I've never really been a  doctor person , meaning like many people, I don't like going and I always put it off to something's really bothering me.

Well somehow I managed to get poison ivy all over me at the beach and it was really driving me crazy.

-I made a quick visit with my doctor to treat it, whereupon he started bugging me about how long it had been since I'd had my last breast exam.

Mary, Linda, Michele and Lisa at the beach. 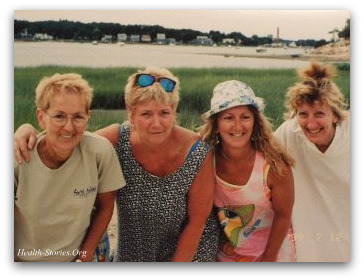 So I made an appointment, then went in for the tests, only to get the dreaded -  abnormal mammogram . I had to go back and get a breast biopsy to be safe .... that's when I got the bad news.

I couldn't believe it, why me? Of all people, I should've known better. The early symptoms were there if I'd only done a self-exam, or had a check-up.

Why didn't I get around to it sooner? I definitely knew I should, I know enough to do a simple breast self-examination, my mom had taught me that much. I knew to look for a hard lump in my breast or a depression in the nipple, or any change in size or shape, and I certainly know now how important it is that a breast cancer tumor be detected as early as possible.

I knew all of these things because my mom had breast cancer years before.

She was older when she had her mammogram and her ultimate breast cancer diagnosis.

But because they had found it late, it had become an invasive ductal carcinoma, one more reason I should have known enough to get yearly mammograms.

After her breast cancer diagnosis I gave myself a thorough self-exam, and I did get a mammogram  but as foolish as this may sound, I thought I had plenty of time to worry about it later, and I didn't follow up with a yearly breast examination, after all, I was only 39, she had been 76.
(I must have been in denial, to use such foolish logic, besides, maybe it runs in the family?)

She even had to have a double radical mastectomy, and she came through it fine even at that age, but that could never happen to me, or so I thought .....13 years later it did.

Dealing with a Breast Cancer Tumor

I guess every breast cancer survivor agonizes over these and many other questions.

-My mother and I were  both  very fortunate, we survived, and although I've had to endure many breast cancer treatments, including radiation, breast cancer has not defined my life.

My oncologist and the nurses told me from the start and I know now that it's true, your outlook is very important with breast cancer and its treatment, and a positive one can go a long way towards beating it.

-In fact, later, with my doctors insight, I underwent reconstructive breast surgery. I tried to think of it - not so much as losing something - but as an opportunity. I had always been rather small (up top), and I saw this as my chance for enhancement.

My husband, not usually too involved with my female health issues, was not surprisingly -in complete agreement with me on this one!

I had been on tamoxafin for five years and I've been cancer free for seven and plan on doing my best to keep it that way.

-If I've learned anything from all of this, it's that life is way too short. I have three sisters and you can be very sure, they have all been made very aware of the importance of early breast cancer detection from this girl. I've tried to make sure they don't make the same mistake that I did, they may not be as lucky as I was.

I also have a little brother(54 years young, but still my "little" brother) He is now fully aware of the male breast cancer symptoms. Breast cancer tumors in men?, he said, he didn't believe me.

-Like many men he was not aware of the possibility, but he is now, and since he once had a prostate issue, he listened. Although it is rare, the symptoms are very similar.

I hope that in telling my story, a lot of you procrastinators (like me) out there will wake up and make that appointment NOW - please, don't put it off another second!

Do you know your Bmi? -It may help reduce your Breast Cancer Risk.

Answer the following questions True or False. Give yourself 1 point for each correct answer.

#1. The most common cancer for both men and women is breast cancer.

-Answer: False The most common cancer is basal cell(skin) cancer.(both men and women)

#2. The most common cancer among women in the United States, surprisingly is not cancer of the breast.(excluding skin cancer)

#3. Breast cancer in men is also the most prevalent form of cancer in the U.S. (excl. skin cancer)

-Answer: False For men, cancer of the prostate is the most common, although there are over 1600 cases of breast cancer in men every year.

#4. The leading cause of death in women is directly related to breast cancer tumors.

-Answer: False The leading cause of death in women is heart disease. The leading cancer death is lung cancer, breast cancer is number 2.

Although it is number 2, 20% of all cancer deaths are from breast cancer. It is estimated that over 40,000 women will die this year from these breast diseases.

#5. Caucasian women are more likely to be diagnosed with breast cancer than any other race, or ethnicity in the United States.

#6. It is estimated that in the United States alone, 7 billion dollars a year was spent on research for breast cancer tumors.

-Answer: False Seven billion dollars a year is spent, but on breast cancer treatments, not research.

#7. Several factors have been identified that may affect a womans risk of developing a breast cancer tumor.

#8. In 1990, Congress passed an Act to help improve a women's access to screening for breast cancer.

#9. Since 1990, Breast Cancer deaths have been steadily increasing.

-Answer: False Breast cancer deaths have been decreasing, in Fact, between 2000 and 2004 the rate of breast cancer has dropped by 10%.

#10. The most effective and readily available method of screening for the early symptoms of breast cancer, and breast cancer tumors
-is Mammography.

-Answer: True It is suggested by the United States Preventative Task Force, that women 40 years and older have a breast exam and a mamogram every 1 or 2 years.

#11. Studies have shown that Breast Cancer Awareness, as well as early detection of breast cancer, and a self-exam can save many lives.

-Answer:True Women 40 and older that have regular screenings, can reduce mortality by 20-25% during a 10 year period, so what are you waiting for?

-Well, How did you score?

0-3 points - You need some serious help in your awareness!

7 points and over - You've Passed the Breast Cancer Tumor Awareness Quiz in flying colors! This can be extremely important for your future.

Breast Cancer Awareness is So Important, Spread the Word!

-There's a serious lack of awareness, especially in younger women, where it's also the most dangerous. Please help increase awareness and join a support group if you can. -Support others and be supported.

There are many ways to help in the fight against breast cancer.

-Check out this 2009 video with Miley Cyrus and her mom, and how they show their support for breast cancer awareness.

Breast cancer  awareness month  is one great way. Through fund raising, education and training -the fight  can  be won by many, and the friends made along the way .... can make  any  cure possible.

What is the Weight Risk Factor After Age 18?

Chart for a Balanced Diet

...  it really can work
wonders for you and others!